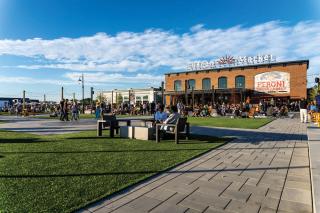 Seabiscuit ran at Rockingham Park in Salem, N.H., in the Thirties. The track just 30 miles north of Boston was then called “the finest racecourse in the world.” When it closed in 2009, Salem formed a committee to find an interested party to develop the 170-plus-acre site. It failed to.

That’s when a member of the committee named Joe Faro, a successful Salem restaurateur and manufacturer of fine Italian foods, decided to take a gamble bigger than any ever wagered at Rockingham Park. He arranged financing to acquire the parcel of land and hired former Easton Town Center leasing director Mike Powers. Together they disassembled Rockingham and created, essentially, a new town off of I-93 in Salem.

With its second phase opened last year, Tuscan Village has 600 residential units, a Market Basket supermarket, a lake, and the beginnings of an expansive retail district that includes L.L. Bean, William Sonoma, Pottery Barn, and Arhaus. Though much more is yet to come, Tuscan Village has already become the haunt of thousands of people in the Boston Metro.

“The complex looks to be less than half completed, but already it’s a hopping place,” said a story in the Manchester Union Leader. “The Saturday night we were there, the place was packed.”

“This really has really been a collaboration between our team and the town of Salem,” Faro said. “We all saw the site as something special. Governor [Christopher] Sununu calls Tuscan Village ‘the gateway to New Hampshire.’”

Powers claims that store sales have soared significantly higher than tenants expected because of the high volumes of traffic descending on Tuscan Village.

“Smuttynose—a well-established beer brand in this state—has a very popular beer garden near the lake and the state allowed us an extended service area for alcohol. Guests can wander with their drinks from place to place,” noted Powers.

Still to come at Tuscan Village are the build-out of 700,000 sq. ft. of retail, a Mass General Brigham Medical Campus, a Marriott Autograph hotel, and 700 more residential units. People escaping Boston during the pandemic quickly snapped up all the apartments originally planned, leading Faro to build more.

No kids or grandkids of the denizens of Rockingham Park will be betting at the grand old track, but many will be living on it.

Stay tuned for daily profiles of the next six centers. Until then, catch up on what you missed:

No. 1 Easton Town Center
No. 2 American Dream
No. 3 Galleria Dallas