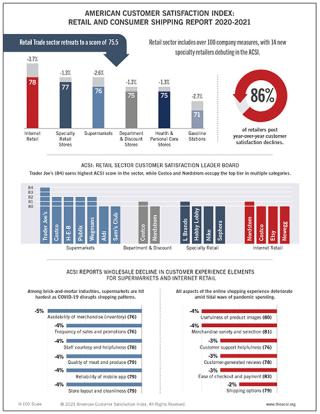 Trader Joe’s kept its customer satisfaction score steady during 2020, which is more than most other retailers can say.

Trader Joe’s topped the supermarket industry – and all retailers – with a stable score of 84, according to the American Customer Satisfaction Index (ACSI) retail and consumer shipping report 2020-2021. The overall customer satisfaction score declined 2.3% to a score of 75.5 (out of 100), which is the lowest ACSI score posted for the retail sector since 2015.

Among the non-gas station and shipping categories, not one escaped the trend of declining customer satisfaction in 2020. Following is a review of performance in each category.

Internet retail
For 2020, online retail lost the most ground among all retail categories, tumbling 3.7% to an ACSI score of 78. Nordstrom captured the industry lead despite retreating 1% to 81. In second place, Costco (down 1%), Etsy (down 2%), and Newegg (down 1%) all deadlocked at 80. Former industry leader Amazon fell 5% to an all-time low score of 79.

With a stable score of 78, Target was the only e-commerce retailer to buck the downward ACSI trend. Walmart and Sears remained the category’s bottom-dwellers. Walmart fell 1% to 73, while Sears dropped 1% to 72.

Among the low-end performers, Dollar Tree stumbled 4% to an all-time low of 74. Dollar General fell 3% to share the bottom of the category with Walmart (unchanged) at 71.

Specialty retailers
Customer satisfaction with specialty retail stores receded 1.3% to an ACSI score of 77, marking the category’s lowest point since 2015. L Brands topped specialty retailers for a seventh straight year, slipping 1% to 81. Hobby Lobby and Nike both debuted in second place at 80, joined by Sephora (unchanged).

Among the biggest decliners, Ascena’s ACSI score plunged 5% to 76, while customer satisfaction uniformly sank 4% for the three major home improvement retailers: Menards (77), Home Depot (75), and Lowe’s (75). J. Crew received a first-time ACSI score of 75, the lowest among apparel chains, while Ace Hardware entered the Index at 74. At the bottom, Williams-Sonoma scored 73 in its debut ACSI appearance, while GameStop continues to rank last among all specialty retailers, plummeting 4% to an all-time low score of 72.

Drug stores
For a third year, customer satisfaction with the drug store industry weakened, dropping 1.3% to an ACSI score of 75. A group of smaller drug stores remained the industry leader while falling 4% to 79. CVS is next, steady at 77 for the third straight year, followed by Kroger, which slid 3% to a score of 76.

Walgreens stayed below the industry average, inching back 1% to 74, followed by Walmart, slipping 1% to 73. Rite Aid shared the bottom of the industry with Albertsons Companies, both declining 4% to 72.

Supermarkets
After four years of near-stable customer satisfaction, the supermarket industry plunged 2.6% to 76. Following top performer Trader Joe’s (84), four companies tied for second place with scores of 82: Costco (down 1%), H-E-B (down 2%), Publix (down 1%), and Wegmans (down 2%). The remaining top-tier performer from 2019, Aldi, slipped 4% to tie with a stable Sam’s Club at 80. Albertsons Companies fell 5% to 71, tying for last place with Walmart, which declined 3%.

Consumer shipping
Customer satisfaction with consumer shipping slid 1.3% to an ACSI score of 76, representing an all-time industry low. FedEx remained in the lead despite declining 3% to 78. UPS faded for a third straight year, dipping 1% to 75. The U.S. Postal Service’s (USPS) Express and Priority Mail rose one point to 73.