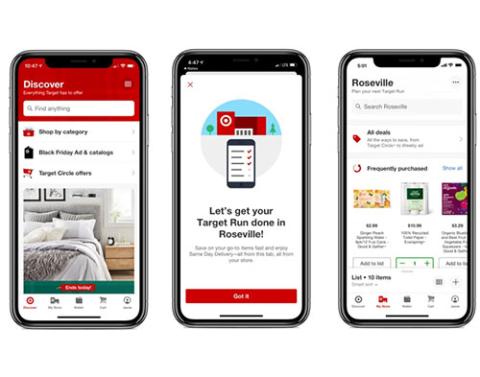 Target’s increased focus on building its e-commerce business is paying off.

The discounter, which used to rank No. 11 in the U.S. in e-commerce sales, is now poised to bypass three competitors to become No. 8, according to a new report from eMarketer. The report shows strong growth for Target’s e-commerce business while that of Qurate Retail Group (owner of HSN and QVC) and Macy’s will decline.

Target’s e-commerce business will jump 24 % in 2020 to $8.34 billion; its share of the total U.S. e-commerce market will grow to 1.2%, according to eMarketer. Target will also inch past Costco this year, with only $10 million in online sales separating the two companies.

Despite Target’s growth, the discounter and the other eight retailers in the top remain far behind Amazon, which is projected to capture 38.7% of U.S. online sales this year, up from 37.3% in 2019.

Amazon also is far ahead of its closest competitor, Walmart, which has a 5.3% share. (A list of the top 10 e-commerce retailers is at the end of article.) In total, eMarketer projects that Amazon will capture 4.6% of total retail sales, both online and offline.

“At a time when brick-and-mortar stores are struggling to keep up with the fast-changing retail landscape, Target seems to have hit the bullseye,” eMarketer forecasting analyst Cindy Liu said. “Store renovations and expanding same-day fulfillment options, such as in-store pickup, drive-up and delivery with Shipt, are paying off. Target has found a way to use its stores to fulfill online orders while keeping up with customer demands for convenience and speed.”

Macy's will fall to No.10 and see its e-commerce market share drop to 1.1% from 1.2% in 2019, even though its online business continues to grow. Qurate’s online sales will decline for the second year in a row, dropping out of the top 10 for the first time.

“The softening apparel market is adding pressure to both Qurate and Macy’s, whose main product lines are made up of apparel and fashion,” Liu said. “As these two retailers struggle to meet the demands of consumers and fail to pull in new shoppers, we will see other retailers capitalize on their share declines this year.”

Other retailers on the top 10 list are also losing share. eBay and Apple will both see their shares of the US e-commerce market drop slightly in 2020. Meanwhile, Amazon’s share will grow to 38.7%. 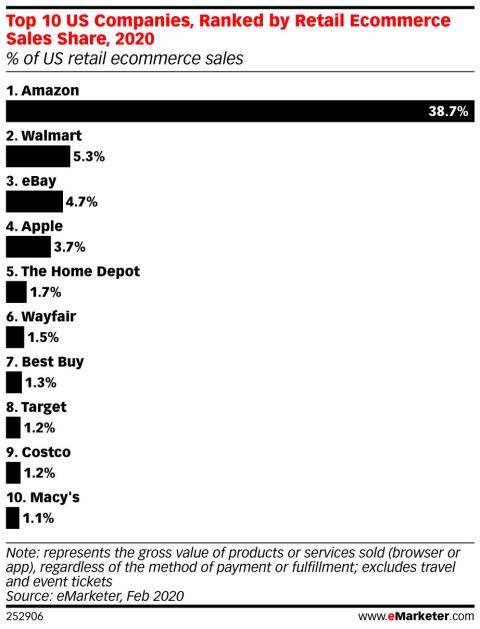