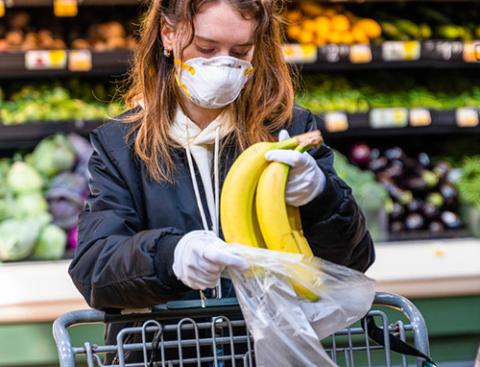 The grocery industry has exerted the most consistent and visible efforts in implementing health and safety standards in response to the pandemic, followed by big-box and drug stores.

That’s according to Ipsos’ Consumer Health & Safety Index, which polled 2,000 Americans to learn which practices they considered most important, then mystery-shopped stores across 45 major U.S. retailers to determine which were acting most in line with customer expectations.

Whole Foods Market stood out as the Health & Safety all-star and was the top-performing retailer in the study. The grocer demonstrated near-universal compliance with associates wearing face coverings inside (98%), respecting 6-foot boundaries in customer interactions inside (91%), providing. plexiglass barriers at checkout (95%), and offering contactless payment (87%) at the stores visited, the study found.

The Ipsos study comes on the heels of another recent survey from Magid, which found Amazon to be the food retailer with the most favorable response to the COVID-19 pandemic. https://blog.aboutamazon.com/shopping/customers-recognize-amazon-as-the-food-retailer-with-the-most-favorable-response-to-the-covid-19-pandemic

Rounding out the top three performers was Trader Joe’s due to their consistency and attention to the most important health and safety factors to consumers. Consumer research conducted by Ipsos confirmed that active monitoring of traffic and guest occupancy is something consumers value significantly. Trader Joe’s far surpasses all the other grocery retailers in this area, with 94% of stores visited actively managing this process at the entrance, the report said.

• 47% of grocery stores visited in the Index were reported to be consistently cleaning high-touch exterior areas, compared with the cross-industry average of 16%. Similarly, 64% of grocery stores visited were observed actively managing the number of customers entering the stores, compared with the cross-industry average of 42%.

• Big-box retailers visited in the Index performed better at cleaning interior locations (51%) than any industry other aside from grocery and lagged just behind grocery and drug stores visited at providing barriers at checkout (83%).