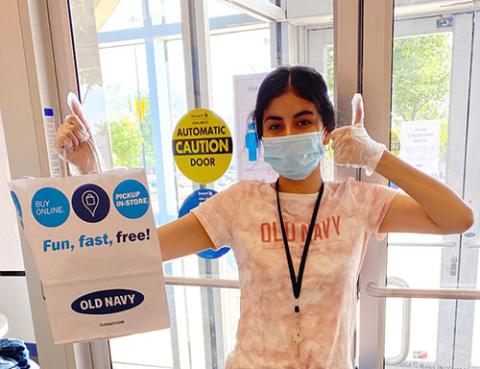 Gap Inc. will start reopening its stores, starting with a small selection of locations in Texas this weekend, as COVID-19 lockdown restrictions slowly begin to ease in some areas.

“We are actively working with the local government, led by health official guidelines, and in partnership with RILA and industry peers, to open our stores when and where it is safe to do so,” the company stated.

Similar to other retailers such as Nordstrom, which detailed its store reopening plans yesterday, it will not be business as usual at the reopened Gap stores. The apparel giant said it is implementing enhanced safety measures to make its stores “a trusted place for customers to return to shopping as the economy reopens.”

“Our whole goal is to be the gold standard when it comes to safe retailing,” CEO Sonia Syngal told CNBC in a phone interview. “Being trusted in this process is paramount for us.”

Gap also noted that in addition to 1,000 ship from store locations, contactless curbside pickup is available in 75 locations. It plans to expand both programs in the coming months.

“As we leverage our stores as distribution hubs, lean into the meaningful acceleration of our online business and play forward the learnings from our Asia business where all locations are now open, we believe we’ll be well-positioned as this crisis subsides,” Syngal said in a statement.

The outlook for the long-struggling Gap has grown more dire as it shut down its brick-and-mortar network amid the pandemic. In a Securities and Exchange filing, the retailer revealed that, beginning in April, it stopped paying rent on its stores and is in discussions to renegotiate or, in some cases, even terminate leases and close stores entirely.

“If we are unable to renegotiate the leases and continue to suspend rent payments, the landlords under a majority of the leases for our stores in the United States could allege that we are in default under the leases and attempt to terminate our lease and accelerate our future rents due there under,” Gap stated in the filing.

“We are fully engaged in conversations with landlords regarding these decisions and plans to reopen,” Syngal told CNBC.

Gap operated 3,345 stores globally, with an additional 574 franchise locations, as of Feb. 1.