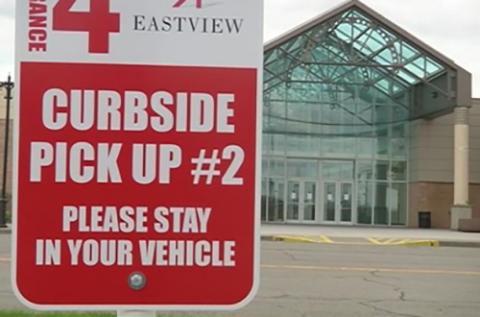 David Simon, chief executive of the largest mall-owner in the United States, wants tenants with percentage-of-sales leases to count merchandise purchased online but picked up in their stores to count those receipts in their monthly tallies.

“We’re just looking not to get hurt when they do sales,” Simon was quoted as saying in The Wall Street Journal.

American consumers spent more than $861 billion buying merchandise online in 2020, a 40% increase over 2019 and the first time that online sellers accounted for more than 20% of retail dollars spent. And those dollars weren’t claimed solely by Amazon and other direct-to-consumer retailers, but by brick-and-mortar mainstays like Walmart, Kroger, and Best Buy that will use their stores to fulfill local online purchases.

Malls have designated curbside pick-up locations to aid specialty retailers forced to intensify their omnichannel efforts, and mall owners like Simon and PREIT have considered turning empty anchor locations into mini-distribution centers. Such efforts are likely to expand. Industrial space for warehouses and fulfillment operations will be hard to come by in post-pandemic times.

CBRE released a study this week reporting that industrial big-box rents have risen 10% during the last 12 months and nearly doubled in some major markets. Specialty retailers will continue to use stores to fulfill online orders, therefore, and their landlords will continue to add the online receipts to percentage-rent calculations. But this phenomenon is not entirely new.

“Pre online and pre-email, there were clauses in the leases that carved out catalog sales. Landlords figured that if the sale’s being put through the register, it should count as a store sale,” said CBRE senior VP Adam Cummings, who represents mall tenants. ”Tenants, however, can counter that customers picking up online sales are added mall traffic that could end up shopping at other stores.”