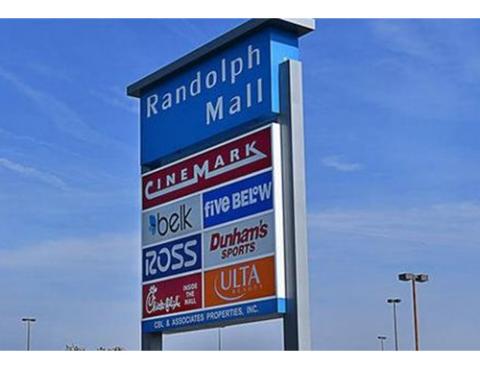 The old Randolph Mall--soon to be the new Asheboro Mall--in Asheboro, N.C.

A May 2019 review of the Randolph Mall in Asheboro, N.C., by “Pawlover”, said, “This mall probably won't last too much longer, which is a bit sad.” Well, Pawlover, cheer up. The mall is making a comeback.

Augusta, Ga.-based Hull Property Group purchased the 380,000-sq.-ft.s property, renamed it Asheboro Mall, and reconfigured the emptied Macy’s as an additional entrance flanked by two storefronts. Hull demolished a former bank in front of the mall and replaced it with a line of several stores and is about to construct a new plaza that will provide easier access to the Cinema VII.

“One of the things you have to do is you have to reinvest in the property. There is no such thing as bad property, just bad stewards of property,” Hull’s VP of government relations John Mulerin told Fox 8 news in Asheboro.

Hull, which specializes in reviving downtrodden B and C malls, refreshes interiors with new carpeting, higher ceilings, and improved lighting. While its leasing team tries to fill empty spaces inside the mall, it puts walls up over the storefronts and works with local libraries and historical societies to adorn them with murals composed of local lore.

Hull, which owns more than 30 malls in the Southeast, Northeast, and Midwest, plans to have its renovations at the new Asheboro mall completed in time for the holiday shopping season.