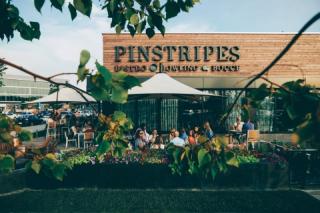 Pinstripes will soon be opening at Westfield malls in Paramus and Topanga.

Pinstripes, the bowling-bocci-beer-and-bistro concept that’s signed development deals with Simon and Brookfield has struck a deal with another top mall operator, Unibail-Rodamco-Westfield.

Pinstripes will open next year at Westfield Garden State Plaza in New Jersey and will be part of the 180,000-sq.-ft. expansion now under development at Westfield Topanga in Los Angeles - sites Pinstripes founder and CEO Dale Schwartz called “two of the most dynamic centers in the United States.”

“Our venues feed the souls of our guests--young and old--and are yearned for more than ever in this post-COVID environment,” Schwartz said.

In 2019, the Northbrook, Ill.-based company signed deals with Simon Property Group and Brookfield Properties, awarding minority stock deals to the mall owners in return for space locations in an unspecified number of properties.

Schwartz spent most of a career dating back to the mid-1980s in the pharmaceutical business, serving as co-CEO of the natural pharmacy retailer Pharmaca and CEO of the biotech company Infigen.

Pinstripes has 13 locations in locations ranging from Chicago to Houston to San Mateo. The brand is moving aggressively into Florida with locations going up in Aventura, Coral Gables, and Orlando.